Rats and Rats - Which? 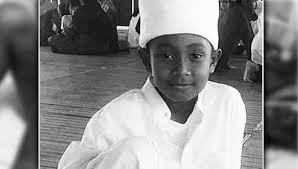 Thaqif's family, however, are incensed that they were given this news today by reporters, instead of the police or the Health Ministry.

His mother, Felda Wani Ahmad told The Malaysian Insight today that she will not accept the post mortem results, questioning why none of the other students in the school – Madrasah Tahfiz Al-Jauhar – had not contracted the disease.

The last check showed that the school had 109 students and six teachers.

"Something is not right," Felda told The Malaysian Insight. [...]

A 29-year-old assistant warden in the school was arrested to facilitate investigations as reports emerged that he had beaten Thaqif with a rubber hose.

The assistant warden, who had a previous conviction for robbery, was later released on a RM20,000 court bond.

Felda also questioned why the police and hospital authorities did not inform her and the family before releasing the results to the media.

"I'm still shocked, I think the results are illogical. We can accept that he (Thaqif) is gone, but we cannot accept the results," she said.

I have to admit, that like Thaqif's mum, I am not satisfied with the findings of the second post-mortem.

Recall, earlier the exhumation was also done without his mum knowing. His mum was so much in grief about the unexpected (initially unknown to her) exhumation said: "It's not a cat but my son".


Again for an unforgivable second time, the Ministry of Health f**ked it up, lacking basic decent courtesy in informing Thaqif's family of the exhumation findings before releasing them to the press. WTF has been going on?

It's somewhat strange none of the other students at Madrasah Tahfiz Al-Jauhar suffered in any degree from leptospirosis.

Was Thaqif so uniquely unfortunate, perhaps cursed by God or Satan (take your pick) as to be the ONLY student in the Madrasah to be inflicted by the poisonous rat urine?

Thaqif, you must be strange if God picked only you
To be afflicted by poisonous effect of leptospirosis
Why'd the Almighty picked on a good Muslim too
You just wanted to be a Hafiz, not to suffer necrosis

Legs already amputated, your arm was about to be
This time they blamed the rats, the dogs were not
Throughout the exhumation they ignored your family
Y? Perhaps they didn't want to, perhaps they 'forgot'

And you prayed to Allah swt for your parents to know
Horrible abuses &amp; beatings heaped upon you 2 awful
You just wanted a change of Madrasah and not to forgo
Studying the Quran; the torture was too much for you

We quote Shakespeare to describe a situation wrong
Namely, "Something is rotten in the state of Denmark"
You could not tolerate the beatings, you did not belong
In a Madrasah that beat student limbs until they're dark