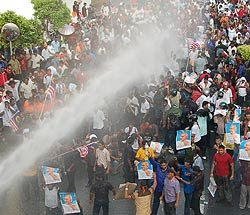 The explosion of our H-synergy
Tore away masks of hypocrisy
Ripping to shreds the snow white
Fleece of ethnic wolves, howling
At black sheep not cukup Bersih
Not even of de facto human status
To merit the march in messianic
Footsteps to the Arc de Triomphe
Posted by KTemoc at 11:53 am No comments: