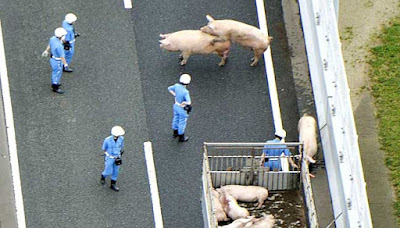 Runaway pigs held up traffic for five hours after they escaped from a lorry taking them to a slaughterhouse.

The road hogs made their bid for freedom after their truck crashed into another vehicle on the side of the highway in Ikeda, western Japan.

Out of the 37 animals on the truck 19 tried to save their bacon.

The video filmed from a passing car shows the pigs casually trotting up and down the hard shoulder while others laze and sniff about on the verge.

Police officers spent five hours trying to ensure the pigs did not stray into oncoming traffic.

Japanese media reported none of the pigs were harmed in either the crash or the capture process,

However, it was unclear of the pigs were taken to the slaughterhouse after they were rounded up by police.

I have to say the Japanese police are not only tolerant but also compassionate, as they realised those pigs were due for the abattoir, and a last chance to "thank you Ma'am" would be an appropriate and timely pre-execution "last meal". 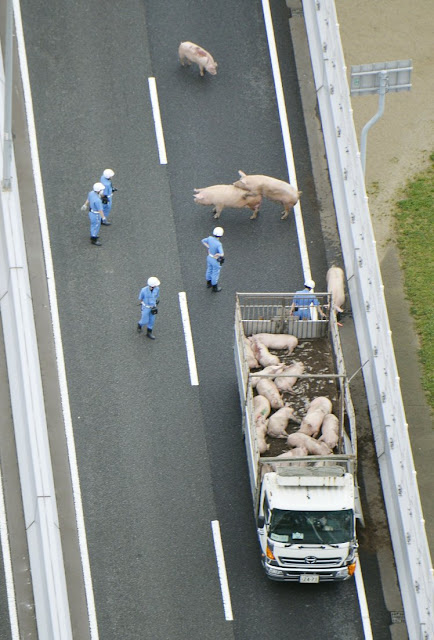 I was on my way to the slaughterhouse
To meet my fate, my pre-destined end
I thought I would be quiet as a mouse
But by holy grace, a last gift was sent

'Twas Petunia, my pen-mate in the farm
Who oinked to me about our to-be karma
That for us there'd be no further harm
If we took a "bonk" prior to our samsara

Policemen compassionate as Buddhists
Stood very silently and sympathetically
As we worked ourselves into exotic bliss
One for the road, one whispered quietly

We shall become happier bacon and ham
As Macca's breakfast burger and tonkatsu
If you don't like haram Maccas, goddam
Then Penangites may enjoy us as bah-hoo